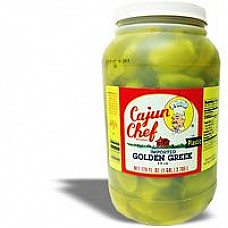 Have A Question For This Product?

There are no questions for this product.

What are Pepperoncinis made out of?

Known as golden Greek peppers, Tuscan peppers, or sweet Italian peppers, pepperoncini (also “peperoncini”) is a variety of chili pepper, scientifically known as capsicum annuum, the spicy subset of the pepper family. They have thin skin that is yellow to light green in color and are only 2-3 inches long.

How do you slice a pepperoncini?

To prep the Peperoncini, cut off the stem end and discard, then squeeze out the seeds and cut into slices about 1/2 inch thick. (You might need to drain them in a colander if they're extra juicy.) You can use more or less sliced Peperoncini to taste; I used about 1 cup.

What does pepperoncini mean?

Are Pepperoncinis and banana peppers the same thing?

Banana peppers and pepperoncini peppers differ in three very distinct ways: Heat, Appearance, and Flavor. Both peppers measure up to 500 Scoville Heat Units on the Scoville Scale, but some banana peppers can have no heat, whereas the mildest pepperoncinis will still have just a touch of heat.